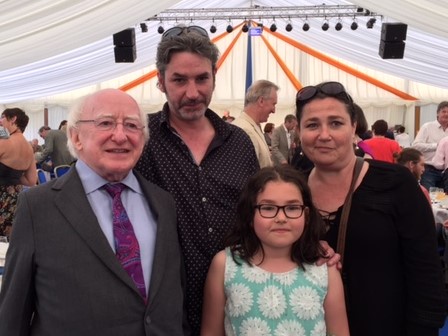 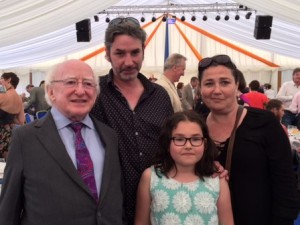 Last Sunday Cate from 3rd Class met the President. The president and his wife were hosting a tea party to celebrate Irish Culture.
It was to celebrate Deirdre O’Connell who set up the Focus Theatre where a lot of older generation actors trained.
Many of the people invited were writers, actors and theatre people who have contributed to the theatre and who had links to The Focus Theatre. Cate’s great uncle was Johnny Murphy (Joey the Lips in The Commitments) and the president and Sabina attended his funeral as Sabina used to be an actress and trained at The Focus. Due to that connection and Cate’s parents involvement with the theatre, they were invited to attend.
There was lots of music, performance and readings. The lead singer of Aslan performed and the whole place turned into a bit of a rock gig!
Cate had met Sabina at the funeral of her great uncle but was dying to meet President Higgins so Peter (Cate’s Dad) introduced her and a photo was snapped.
JSS News / Primary D4 News
C2025 / President Higgins / President of Ireland / The Focus Theatre