On Tuesday 16 February the fifth and sixth year Classical Studies and Latin students went to Rome for the mid-term. What a nice way to spend the break in the Eternal City enjoying the atmosphere and sights.

It was an early start – Ryanair Flight FR11 left for Ciampino at 6.30, but the early departure meant we got to our hostel near Termini and after lunch had the afternoon to begin our tour of Rome.

First on the list was Spanish Steps, – a little disappointing as they were partially closed off but nevertheless the feeling was there. With ice creams in hand we then walked to the Ara Pacis and spent a long time studying the sculptures and the significance of this early work of Augustan propaganda that stated that he had brought peace to Rome. We then crossed the Tiber to St Peter’s Square and after a security check we entered the great basilica. The Pieta was much admired as were all the other works of art. Tiring now we took the metro back to Castro Praetorio and round the corner to our hostel,  a most welcome sight!. Out to dinner and home to bed. All slept well.

Up early and after breakfast we went to The Baths of Caracalla and wondered at the great size of them and at the Roman’s fondness for water. Tepidarium, caldarium, apodyterium, frigidarium, palaestra and hypocaust were quickly recognized and identified by the students..

From there we walked to the Colosseum and tarried at the Arch of Constantine, pondering over the meaning of the sculptures adorning this great edifice.. Great fun was had by all in the Colosseum and even in its ruined state it was still possible to see the grandeur of it all  and imagine the gruesome doings that took place there.  Hungry by then we had lunch  in a nearby cafe..“Italy is so cheap, you can get a Pasta dish or Pizza and a drink for 6 euro,” said one of the girls. This was indeed true of most places we went.

Energy restored we next tackled the Palatine Hill, the ‘des res’ of Roman times and home to Emperors such as Augustus and Domitian.  We then entered the Forum, first stopping to admire the Arch of Titus which commemorated his great victory over Judaea, then stopping where Caesar was buried.. “Friends, Romans Countrymen lend me your ears, I come to bury Caesar, not to praise him. The evil that men do lives after them.” These words spoken by  Mark Anthony, according to Shakespeare and eloquently recited by our very own bard Mr O’Connor resonated throughout the Forum that day.  He might give up his day job yet!
We also had a look at the Rostra and wondered at the great speeches delivered by Cicero and others.

Trajan’s Column was a short distance away and we examined its low relief sculptures telling of his Dacian campaigns.  Much of the sculpture was familiar to the students and opinions and observations could be heard as we kept our gaze averted upwards. With stiff necks we marched along to the Pantheon and were suitably awed by its magnificent interior. Rewarded  then by some lovely gelato we took in the Trevi Fountain on our way back to the hostel. Coins were thrown into the clear water and promises were made to return one day.

Day three we took the underground and a public bus to Tivoli where we visited Hadrian’s Villa. He was out and we almost had the place to ourselves. It was great wandering around such an historic place with its vast open spaces, huge  Bath Houses, Maritime Theatre, Canopus Canal complete with Caryatids and the great Stoa Poikile. This place was a big hit with our students.   This completed our sight seeing activities. and  after some really good quality homemade  pasta in Tivoli, (this time it cost €5!) we made our way back to Rome.

That night a very pleasant dinner was had by all and many vows were made to return to Rome. They have after all thrown ‘ three coins in the fountain’. so we are sure that that the Trevi Fountain never lies.

And so it was a very educational and fun trip.  Thanks to our students for making it such  a success. 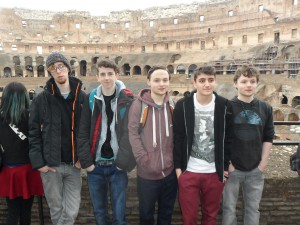 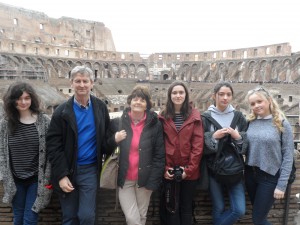 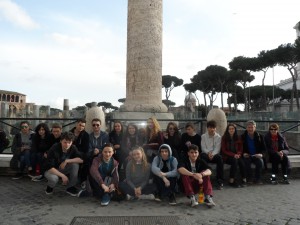 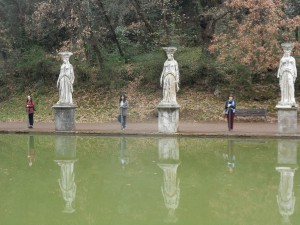 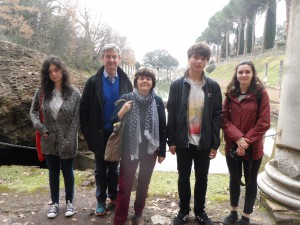 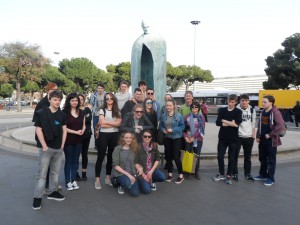 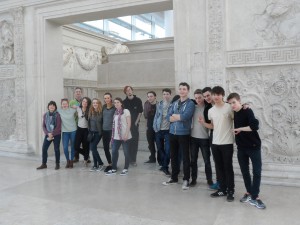 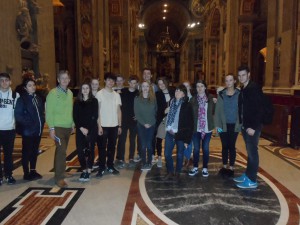 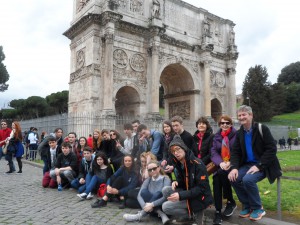