On Wednesday 17th May 2017, we were delighted to welcome the Indian Ambassador, Mrs Vijay Thakur Singh and her First Secretary Mrs Anita Shukla. They came to a Sanskrit Display from the Junior Infants – 2nd class and later to an Individual Sanskrit Speech Competition 2nd – 6th class. Prizes ranged from 10 euro to 50 euro, kindly donated by the Embassy. There were 18 winners plus numerous runner up Prizes.

The Ambassador spoke of how she had been educated by Irish teachers in a Loreto Convent in India. As a result when she came to Ireland she felt right at home. She mentioned how the Prime Minister of India Narendra Modi still speaks fondly of his visit to Ireland in September 2014 when 24 pupils from John Scottus sang Sanskrit Songs for him.

She praised the childrens’ ability and said with our mutual Sanskrit connection that one day one of them could become Irish Ambassador to India! She also said ones abilities are for others and that the really great people are also humble. She gave the example of the tree having produced a huge crop of fruit bows down and shares with others just like in our Sanskrit song.

Many thanks to Mrs Shukla, Mr Michael Delaney and Mr Vincent Wallace who were our Adjudicators for the Competition.

It was a splendid occasion with gifts being exchanged. We were honoured to accept some beautiful “Incredible India” books from the Embassy.

What a wonderful morning we had and such an uplift for all. 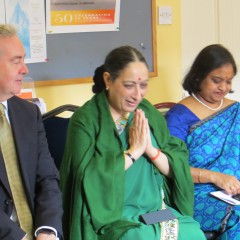 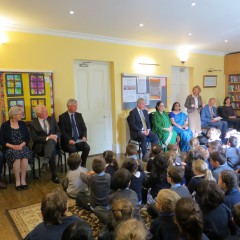 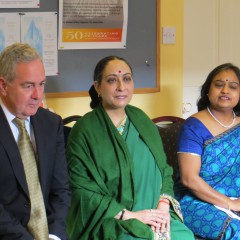 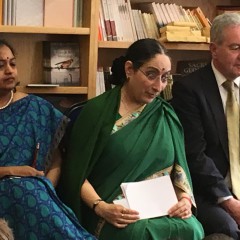