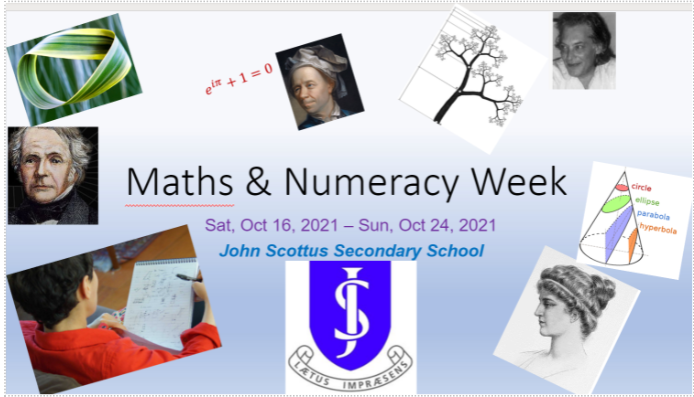 MathsWeek is an excellent opportunity to bring out the budding mathematician in all of our students, and boy do they get into it. From the first Assembly on Monday 18th, they began sending in maths jokes and riddles, and there was a general buzz of interest around the school as they exercised their brains  to solve them. Particular, mention here is given to the riddles that Mr Kortenhorst set up in each classroom.

Covid conditions prevailed so that activities had to be replicated in each separate classroom or organized for outdoors, which, fortunately, is well facilitated by the school woodlands and grassed areas.

We provided the opportunity for students in first to third year to sit the Olympiad maths competition. This was mostly undertaken voluntarily at lunch time and it was impressive to see students giving up their free time to attend, as was their total attention to the tasks involved.

Another lunchtime activity stretched the students’ powers of “reasonable” estimating as they tried to work out the number of marbles in a jar, as well as other challenges such as considering the probability of selecting a red marble at random from the jar. It was exciting watching the students crowd round as they demonstrated various ways of finding their estimates, one student telling me later that he, “considered how many layers of marbles were in the jar, then got the number in a layer and multiplied”. He actually came quite close. Other students had fun casting wild, wonderful and way off estimations which had their friends aghast and eagerly attempting to bring them back to reality with mathematical reason

The students donned their mathematical vision to see maths all around them during the week.

Some of the jokes entered in our Maths Joke competition were:

What do you call mathematical friends?

Thanks once again to Ms Grace for her adept selection of prizes.