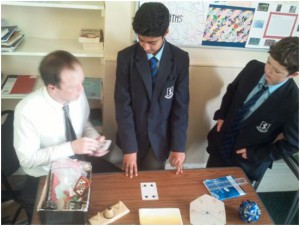 Ms Cronin, Mr Flynn and Mr Brady lead the school through Maths Week (Oct 19th -23rd). Here are some of the highlights.

The week kicked off with a joke contest in Monday’s assembly. The joke’s were entered and recited by students. For the cheesiest entry, Leah Zara Callanan and Willow Hannon from second year won the coveted cheese strings prize. Christian Madden won the nuts and Tove Murphy won the bananas. Winning jokes include these gems:

Why did the maths teacher ring in sick? She had sprained her angle.

How do mathematicians show their support for farmers? By using their protractors. 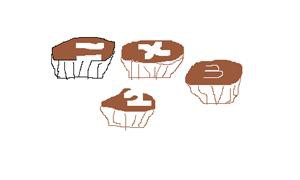 First year Jessica Spratt made some sumptuous chocolate cupcakes for Tuesday with number symbols in white icing. Her class delighted in making out equations with them but the final countdown was the feast that followed.

A sketch of some of Jessica’s cakes-there were only crumbs left by the time anyone thought of taking a photo!

Also on Tuesday, the class teachers, in their morning meeting with their classes, gave maths problems to their classes.

The walls of the school were adorned with bright and colourful posters designed by the first and fourth years. Darcie Anderson, of fourth year, had a clever poster with the caption:

Jobs for which you don’t need maths……..

followed by a blank space.

Roisin Wright, also of fourth year, illustrated the connection of art and maths with her poster demonstrating the addition of primary colours (in pigments and in light) to create the diversity of colour in our environment.

The poster of Delfine Ryan from first year presented a colourful display of triangles with the challenge to count them all.

Throughout the week there were activities relating to p, the most famous transcendental number, such as Ted talks at break time and reference to its amazing appearance beyond its usual home in the ratio of circumference and diameter of any circle. In Thursday’s assembly it was located in such fields as quantum physics, cosmology and our attempts to communicate with extraterrestrial life.

These activities culminated with a competition in the school yard during Thursday’s lunch time to recite as many digits of pi as possible-each student setting themselves a target. There was great interest in the apple and mince pies awarded as prizes to those who met their targets.

The overall winners were Aditi Verma (fourth year) and Aisling Gannon (sixth year) who both managed eighteen digits, without hesitation, after only a short time to practice. It’s a step on the shore to the ocean of trillions of digits known at the moment.

Brianna Woods gave her time, also at Thursday lunch, for some light-hearted fun providing numerology readings to anyone who dared to approach her table for information about themselves or their futures.

The school’s thrust for the emphasis of numeracy in all subjects was especially encouraged this week in the Wednesday staff meeting. All teachers were reminded to continue recognising and promoting how maths plays a part in whatever they are teaching.