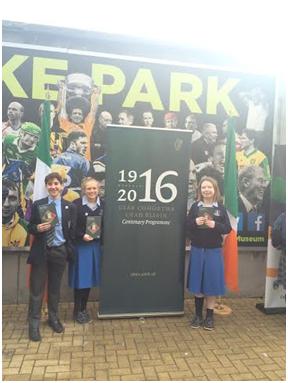 Ryan Tubridy hosted the event. President Michael. D. Higgins read a speech stating how young people have a great part to play in shaping Irelands future. A man acted as Thomas F. Meagher and told us all about his life. Then his great great granddaughter read out a speech. When she finished, Seo Linn performed two songs.

Following this, Christian was appointed to collect the Irish flag on behalf of the school. He collected this from the Irish Defence Force. The ceremony closed with the Irish Anthem. Overall, we really enjoyed the day and we learned a lot about Ireland and its flag. Even though we could not feel our fee as it was so cold we learned a lot.

By Kaiya Reddy and Emer Cunnane