Monday mornings Assembly – recounted by one of the children.

During this morning’s Assembly Miss Dempsey told us that we were starting a new theme, Self-Control. She asked us what Self-Control means. Then she read us a story about Self-Control.

The Story was called the ‘The Whatnot fruit’. It was about a group of travellers who travelled around from place to place. One day when they arrived in a new place the parents were busy setting up the camp, so the children went off to play. While they were playing, they found a tree which had some delicious fruit on it. One of the children asked her father if she could eat the fruit, but he said not to because he didn’t recognise the tree and didn’t know the fruit. However, the fruit looked so delicious the children eat it anyway. After a while, the children’s skin turned orange and they fell into a deep sleep. The parents were very worried. Then a thief came by the camp. He was surprised that only the children were asleep and that the parents hadn’t eaten the fruit. He had been hoping to steal all their belongings. The father promised never to tell anyone what happens when you eat the fruit if the thief helped him to make the children better. The thief told the father that the children would be better in a few hours and they were.

I think the story is about Self-Control because the children needed to practice Self-Control but they didn’t. They eat the fruit even though they were told not to and then they turned orange and fell asleep. 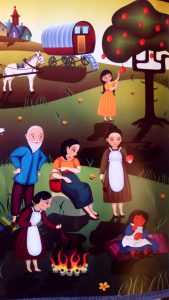 Zooming ahead with Learning