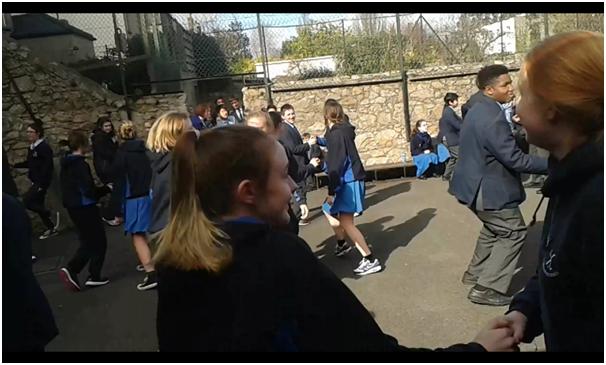 This year, Seachtain na Gaeilge got off to an enthusiastic start! Students were running around the school to complete a 50-question quiz as Gaeilge, all hoping to win a prize. We had an exceptional assembly, or ‘tionól as Gaeilge’ where several students performed. Maria Colfer, Paris Moran and Willow Hannon performed an Irish language version of Avril Lavigne’s song ‘Boyfriend’. Paris then played ‘Báidín Fheilimí on violin and all sang a rousing rendition of ‘Amhrán na bhFiann’. An accomplished Irish dancing display was given by Aisling Spratt.
After the spirited céilí rehearsal on the same day, students were looking forward to the actual céilí, which takes place on Tuesday. A very special ‘go raibh mile maith agat’ to former JSS student, Sophie Madden, who very kindly gave of her time and expertise to coach all the students for the céilí.

Seachtain na Gaeilge concluded with the entire school partaking in a short ceremony to salute our national flag and singing of ‘Amhrán na bhFiann’ in front of the school building on Tuesday, followed by the céilí in the afternoon.