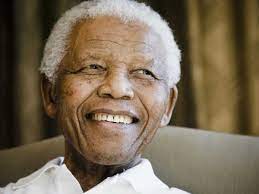 Where did Nelson Mandela grow up?

Nelson grew up in Mvezo, South Africa. His birth name is Rolihlahla. He got the nickname Nelson from a teacher in school. Nelson was a member of the Thimbu royalty. He went to college at fort hare and the university of Witwatersrand.

What did Nelson Mandala do?

Nelson Mandala became the leader in the African National Congress (ANC). Nelson pushed hard for congress and the protesters to follow Gandhi’s nonviolence approach. He started up the ANC. He planned on bombing certain buildings but only empty ones. Mandela would spend the next 27 years in prison until 1990 when he was released.

Nelson spent the next 27 years in prison. He refused to bend his principles in order to be released and stated that he would die for his ideals. Nelson wanted people of all races to have equal rights in South Africa.

Once released from prison, Nelson continued his campaign to end apartheid. His hard work paid off when in 1994 he was elected first black president of South Africa and all races could vote in South Africa. There were several times during the process where violence nearly broke out. Nelson was a strong force in keeping the peace and stopping a civil war. In 1999 he retired and in 2013 he passed on.

Nelson was awarded the Nobel peace prize in 1993.

July 18th is Nelson Mandela Day. People are asked to devote 67 minutes of their time to help others. The 67 minutes represents the 67 years Nelson spent serving his country.

Invictus was a 2009 movie about Nelson Mandela and the South African rugby team.